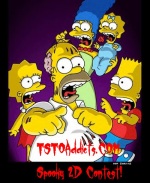 The writers over at TSTO Addicts are hosting a contest for Halloween. To get the full details on the contest please visit their site. From what I could ascertain, the general premises seems to be to create 2D artwork using the various decorations available in the game. The winners will receive either iTunes or Play Store gift cards which can be (but do not necessarily have to be) spent on donuts.

If you have the in-game cash and free space to use as your canvas, this contest could be for you.

First off, if you are playing the game using an Android device, feel free to ignore this post.

At today’s press conference, Engadget learned that iOS 7 will be 64-bit. If you’re not a technophile, all of this may sound completely foreign. As of right now, all apps are 32-bit. If developers choose to, they can create 64-bit optimized apps which would take full-advantage of the new operating system’s technology.

Of course this only affects you if your Apple device will be capable of upgrading to iOS 7, which releases on September 18th. There is no guarantee that EA will make a 64-bit version of The Simpsons: Tapped Out, but if they do, it could deliver faster performance than the current build.

To reiterate, there are no guarantees any of this will happen. It is just a possibility now that iOS 7 has been revealed to be a 64-bit operating system.

In the past few months The Simpsons: Tapped Out has received a tremendous amount of new content. In June the game received a land and sea expansion, enabling players to build a boardwalk. One month later a brand-new secondary map was added, giving players the opportunity to build their own Krustyland amusement park. In-between these updates we’ve also had new characters, buildings, and quest lines added to Springfield as well.

So what’s next? No one knows for sure. It seems as though the developers are no longer leaving traces of future content in the files, as that information was too easily accessible. Spoilers may be a thing of the past, but what do you think is likely to happen in the coming months?

The odds that there will be a Treehouse of Horror XXIV event seem likely. The Springfield Squidport and Krustyland have both been ignored since their release. However, given that is more content from the show they can add to each of these areas, it would not surprise me to see a future content update that focused on one of these two areas.

As far as voiced characters go, that list is running thin. Yes, The Simpsons universe is expansive and there are some characters that have yet to be added to the game, but to be honest there are not that many left to add. You’re either going to see more obscure characters added, or perhaps more costumes for the existing characters.

What are you hoping to see in future updates?

The Open Air Stage is one of my personal favorite premium items because it opens up more possibilities for the characters in your town. Unfortunately its usefulness does depend on whether or not you have purchased the premium characters that can also make use of this outdoor stage.

My favorite task is “The Be Sharps” which requires four characters, only one of which is a premium character: Barney. There is a chance you could have acquired Barney’s Bowlarama using Santa Coins during the Christmas update, but if you didn’t you’ll have to spend 250 donuts to add it (and him) to your town. That is far too much to spend on one piece of premium content.

While this building does cost 160 donuts, it can be an asset to your town if you choose to use it.

Early in the game, a “Boatload of 2400 Donuts” may have seemed like an excessive amount of donuts. Now that the game has added an additional 14 levels from its original build, there have been numerous new buildings, characters, and decorations added to the game.

If you want everything the game has to offer, it is going to cost you. Of course you could just pick and choose which content to buy. Maybe you only want to buy new characters, and buildings that come with characters. Yeah… that’s still going to cost you between 1,745 and 2,410 donuts, depending on whether or not you managed to make the most of social events like Whacking Day.

Despite all of the statistics that show this is the absolute best deal, it’s also the one people are the most resistant to. People are much more likely to spend a little bit of money at a time, and no amount of charts, data, or gambling alternatives can sway their purchasing habits.

Despite the fact that economics is rooted in statistics and logic, the way we go about spending our money is primarily emotional. Consumers are much more likely to buy something if they feel like they are getting a good deal, regardless of if the deal is actually good.

Microtransactions have proven to be a successful tactic in separating consumers from their money. Yes, $99.99 is a lot to spend on premium content, but is it any more than you’ve spent over the course of your time with the game? If you are curious, go back into your account statements and see how much you’ve actually spent on the game, the answer may surprise you.

If you want to know more, take a look at this episode of Extra Credits, titled “The JC Penny’s Effect“. It will give you a little more insight on how consumers approach financial decisions, particularly in regard to making purchases.
END_OF_DOCUMENT_TOKEN_TO_BE_REPLACED

For $0.99 / £0.69 you can purchase a Golden Scratch-R from the Kwik-E-Mart. Unlike the regular Scratch-R you don’t have to wait six hours to purchase a new one. After all, if you want to spend money on this game, the publishers aren’t going to restrict you from doing so. The question is, are these even a good deal?
END_OF_DOCUMENT_TOKEN_TO_BE_REPLACED

If you are playing this game on a daily basis, you may want to consider spending some money on premium content. The question is, where to start? Of course the first thing you need to decide is how much should I spend on donuts?

Before we even get to that point though, consider how often you play the game. If you play daily, and feel that six-months from now this game will still be a part of you daily routine, it may not be a bad idea to spend some money buying donuts.
END_OF_DOCUMENT_TOKEN_TO_BE_REPLACED

The oft requested “What have you done with…” posts are going to start again as a feature on this blog. As an inaugural post it seems appropriate to ask, what have you done with the first building you place in the game, the Simpson House? Have you paired it with the Kiddie Pool and Homer’s Hammock? Are you keeping with tradition and placing it between Flanders House and the Brown House? Is the backyard fenced in, or is it a bit more open?

END_OF_DOCUMENT_TOKEN_TO_BE_REPLACED

One thing you may have noticed while playing the game is that some characters are voiced, while other are not. The reason for this is that only the voice-actors who comprise the main cast are permitted to have their voices used in the game.

If you take a look at the Wikipedia page for the main cast, you’ll see that most of the characters they voice have already been added into the game. It stands to reason that the developers would want to introduce the remaining voiced characters into the game at some point, particularly the more recognizable ones.
END_OF_DOCUMENT_TOKEN_TO_BE_REPLACED